Back at the workshop –
After finally getting through the border, we made for the nearest large village – Mbeya.  There we had to find another metal workshop to fix Kruger’s roofrack, since the temporary fix hadn’t worked too long.  After getting the gas bottles & petrol cans off the roof, the guys started welding with Dru directing – they weld without any protective gear, not even sunglasses!  After about 45 min, the job was done and it was time to head to Iringa, the nearest village to .  We had debated whether to go to Ruaha or skip it and spend it in the northern parks, but decided on the way to give Ruaha a go.

On the way to Ruaha NP –
We spent the night at Riverside Camp just outside Iringa before heading into the town to get ice and some supplies before heading to Ruaha, 100km away.  The car was also making a strange sound, so we were looking for a mechanic that had been recommended.  But after shunting back and forth with different directions from each person we asked, we gave up and went to look for ice.  That was a no go as well, so except for some bananas we bought on the side of the road, we started the 3 hour journey to Ruaha.  A very corrugated road through the rural backwaters of and we finally got to Ruaha at about 1.30 pm.
Ruaha National Park
We drove through the park on the way to the campsite – the campground is pretty cool, right on the – it’ll be awesome in the raining season.  And to make things better, we were the only campers there for the 2 days.  Actually, except for another car who had a Film permit sticker, we didn’t actually see any other self-drivers.  So camping was peaceful, except for the baboons that roost on the tree in the corner.  The first night they climbed up the tree and peed on us to make us move away from their tree!  The next morning they jumped on our table while we were away, so much so that the ranger had to rescue it from them until we got back… Otherwise the site was great with elephants drinking just in front of our tent in the night – at one stage we were surrounded by about 8 elephants, either drinking or munching on the bushes.
﻿
The first evening we drove to the east side of the campsite, along the river.  The scenery was lovely with plenty of woodland and lots of impala.  We did see one lion sleeping off the afternoon, but otherwise it was about the birds and the landscape.  The following morning we went the other way and almost immediately spotted 2 lions, but it was only further on that we got hit the jackpot.  We were right along the river when we found 3 lions lying on the bank of the river.  It was quite a unique position as they were actually higher than us. After spending some time with them hoping that they would drink (they didn’t) we drove back to the main road, but then found another road that led us to them again.  Not only them, but another 4 lions with them which we hadn’t seen from our original position.   When we found them later on in the afternoon, they hadn’t moved much. 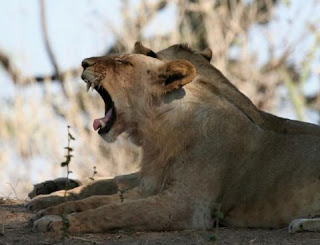 After the lions, we carried on further down the river. Unfortunately though, the road doesn’t actually hug the river, but goes inland, which is a real irritation.  You see virtually nothing except little scrubby bushes.  Besides the one relatively large herd of buffalo, the only other thing of note that we encountered were tsetse flies!  Tsetse flies, which carry a potentially fatal disease called sleeping sickness, are big, brown and slow flies, but a bastard to kill – they just don’t die!  And they sting when they bite, so they can’t really be ignored. Certain areas seem to be particularly prone to tsetses and they invade the car after following the dust when the car is driving.  Finally, we actually had to stop the car, wind up the windows and kill every fly we could find – our “Mammals of East Africa” book is full of tsetse blood!  I was still lucky – I only got bitten once or twice, but Dru took the brunt of their wrath with about 2 dozen bites in about 10 minutes – all painful and they itch for days after.
After lunch we planned to head inland this time to an area we hadn’t been yet.  Dru had spoken to one of the lodge guys at the duka (shop) and they’d seen 4 cheetah and a leopard in the area that morning so we figured we’d try our luck on that side.  The drive is basically along the , at the moment completely dried up, but which feeds the during the rainy season.  Although we didn’t see much game (or the cheetahs or leopard) it was a really nice drive.

There’s a big causeway crossing near the one lodge which would be a massive problem in the wet though.  The one thing we did see a lot of though were baobab trees – you pretty much drive through a baobab forest.  We’re used to seeing one dotted here and there, so to see so many of them in one area is quite spectacular.
We hugged the all the way along and finally started to see a change in vegetation as we neared the confluence of the 2 rivers.  There’s a nice point where the 2 rivers meet so we got out to video and photograph the area.  Because the Mwangusi is dried and the Ruaha is so low, you can actually stand in the middle of the two rivers on the sandy riverbed.
While we were standing there taking photos, we spotted about 3 guys just sitting on the opposite side of the .  This was definitely unusual, since it’s still in the national park boundary and there aren’t any villages around there.  We figured they were probably poachers, subsistence or otherwise, and after a quick wave, decided to get out of there…
The rest of the evening drive was uneventful, although we did spot another lioness, as well as antelope, elephant, and giraffe.  From there, it was back to the campsite to organise dinner – luckily the evening was quiet and we got an early night. 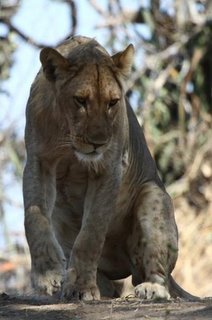 Up early, we headed to what we dubbed “Leopard Rock”.  To get to the river further north, you need to travel a bit inland to bypass the bandas (chalets) before getting back to the riverside.  Along the route is a set of rocks which look tailor-made for leopards.  Unfortunately, the only things sunning themselves on the rocks were the rock hyraxes.  Getting back to the river, we did spot 2 male lions in the middle of the riverbed, but they didn’t seem like moving at all, and being a bit too far for good photos, we left them after a bit.
Soon it was time to head back to the gate, to make it before our permit ran out.  We stopped at the bridge (which is about half an hour from the gate) to have lunch.  It’s a scenic picnic site overlooking the , with a couple of hippos, crocodiles and waterbuck around.  And since there were plenty of flowers, it brought the birds and we identified a sunbird and one of ’s endemics, the Ashy starling.  After a bit of relaxing and birding, we made it back to the gate with time to spare, seeing only tsetse flies along the way…
A rough 3 hour drive later and we were back in Iringa. We amused ourselves by counting the number of big white Orthodox churches there are on the way – this is in addition to other churches and mosques – 8 in 40km – that’s a lot considering the low population density in the area. Otherwise, it was interesting to see the different types of houses on the way – some modern brick houses, while others are still traditional mud and thatch dwellings.
﻿Back at Riverside Campsite, we reorganised the car and made dinner – a lavish affair of curries and rice.  We were staying there the night again, a nice peaceful end to the only Southern park we were visiting this time round – now it’s time to make our way north to Arusha.

Anthill Tiger
From Botswana to Tanzania to Rwanda to Malawi, our search for the elusive Black-footed cat, aka the Anthill Tiger, continues... This blog is a record of our trips to the African bush, and a guide how to do it when you're a self-driving couple. Enjoy! Dru & Cheryl

Check out these sites